Judy Cebula, Communications Director at Lilly Endowment Inc., says that she’s always had a passion for helping people understand issues. As a former news journalist, Cebula says she enjoyed being able to take big issues and explain them to readers, giving them context and analyzing why they were important.

Now, Cebula who has been with Lilly Endowment for 5 years, says that even though her job looks a little different now, her passion for helping people understand the meaning behind an issue has stayed the same.

“I still feel a commitment to help people understand.”

Cebula says that part of her current role is helping organizations continue to advocate for the causes they care about by giving out grants and continuing to support the goals of their recipients.

Cebula has a personal connection to Girls Inc. and has seen first-hand what it has done for her daughter, Elizabeth. Elizabeth got involved in Girls Inc.’s Young Women in Leadership (YWIL) program in high school when her guidance counselor recommended it.

Cebula says that Girls Inc. has helped get Elizabeth out of her shell. The transition from middle school to high school can be a tough one, but Girls Inc. helped Elizabeth set goals for herself and take risks, according to Cebula.

“Both the high school and YWIL have done some really wonderful things,” Cebula says, “Building self-esteem through role models, but also by challenging her.”

Cebula says that like many girls her age, Elizabeth was not very confident in her STEM (science, technology, engineering and math) skills. Girls Inc. helped Elizabeth to gain confidence in her abilities and showed her positive female role models in STEM careers, according to Cebula.

Cebula says she believes that Girls Inc. is a great resource and helps supplement programming that some schools may not have the resources or time to provide. According to Cebula, many times, public schools have so much to deal with and barely enough budget to do so. Girls Inc. is valuable because it provides support for outside-of-school issues that could affect academic performance.

“I think most schools are just doing what they can,” she says, adding, “It’s a luxury to be able to deal with some of the things Girls Inc. does.”

With the support of entities like Lilly Endowment, and others in the community, Cebula says she anticipates Girls Inc. will continue to provide these valuable, needed programs in schools. She hopes that Girls Inc. will do what they’ve always done: continue to foster successful programs, and adapt their teachings to the ever-changing world so that girls can feel prepared for anything. 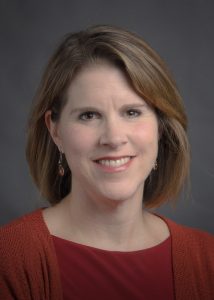 Judith Cebula lives in downtown Indianapolis with her husband, Mike Redmond, and their daughter, Elizabeth Redmond (age 17 – and a proud YWIL student!).

Judith works at Lilly Endowment Inc. as Director of Communications. Lilly Endowment is a private philanthropic foundation founded in 1937 to further the causes of community development, education and religion. It is a separate entity from Eli Lilly and Company. It has a special commitment to its hometown, Indianapolis, and its home state, Indiana. Judith has directed communications at Lilly Endowment since 2014, managing its website, publishing its annual report and working closely with grantees as they tell the story of their grant-funded work. Lilly Endowment is pleased to fund the work of Girls Inc. of Greater Indianapolis and the national efforts of Girls Inc. through support for its National Resource Center, based in Indianapolis.

Samantha Nower is a junior at Ball State University and the Social Media and Marketing Intern at Girls Inc. Samantha is a journalism major and enjoys telling stories of strong, smart, and bold women because they inspire her to succeed.